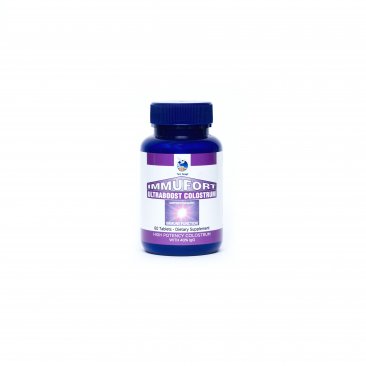 Immufort Ultraboost Colostrum is a powerful product for those needing an extra boost to their immune systems especially those with compromised immune systems undergoing Chemotherapy and Radiation.

Immufort is a natural-based supplement that contains an army of proteins and antibodies specifically designed to help your body fight viruses, bacteria and the stresses of everyday living.

Our bodies’ immune systems are designed to fight back against viruses, bacteria and millions of other nasty invaders. These invaders are getting stronger, deadlier and more widespread as we have seen with the recent Covid-19 pandemic. Our bodies need all the help they can get to maintain strong immune systems ready to support our bodies fight against harmful microbes.

Immunoglobulins - also known as antibodies – are proteins produced mainly by plasma cells in our blood. They are used by our body’s immune system to identify and neutralise pathogens such as bacteria and viruses. Many of these antibodies work together not only to fight the body’s invaders, but to strengthen our immune system and protect against further attacks.

Immufort contains four of these powerful antibodies including IgG (protection), IgA (anti-inflammatory), IgM (boosting natural immunity) and IgF1 (cell growth and regeneration). These antibodies work together with your body’s natural defence systems to fortify and strengthen your immune system.

IgG – Our blood’s main antibody protects the body from infection, controlling and neutralising invading toxins and viruses like Zika. It is the only antibody capable of giving extra immunity to both pregnant women and their babies.

IgA – Vital to immunity, IgA helps stop pathogens from entering the body and causing dehydration, an effect of many viruses and superbugs, which can lead to much more serious problems. IgA protects the body’s internal organ membranes and can also inhibit inflammatory effects like fever.

IgM – The largest antibody in the human circulatory system! These are first antibodies to appear in response to the body’s need to boost and protect its immunity when threatened. It links with other antibodies to make immunity stronger. Even more, IgM’s biological properties can help diagnose infectious diseases, catching them early enough to treat more effectively.

IgF1 – The growth gene that helps produce a protein in humans similar in molecular structure to insulin. It plays an important role in childhood (promoting growth in almost every cell in the body, especially skeletal muscle and bone, liver, kidneys, lungs, nerves and skin) and continues building up organ, tissue and muscle mass in adults. The body’s levels of IgF1 drop during old age, so extra IgF1 is a must!

Immufort’s not-so-secret weapon is colostrum, a natural form of milk produced by the mammary glands of mammals – including humans – in the late stages of pregnancy and the first few days after birth. Rich in proteins, antibodies, immune cells (lymphocytes) and vitamin A, colostrum is produced with breast milk (but with higher a concentration of proteins) to protect the newborn against disease and infection. Immufort’s colostrum, sourced from pasture-fed cows, contains antibodies that treat specific human pathogens (even those that are becoming resistant to antibiotics) including E-coli and Rotavirus. Before the development of antibiotics, colostrum was the main source of natural antibodies used to fight infections. Now that some viruses have become increasingly resistant to those antibiotics, colostrum is once again being used as an effective natural treatment.

Both Calcium and Lactoferrin are found within Immufort’s Colostrum. Calcium is more than just a mineral to build strong bones, it is essential for cell physiology and mineralisation, particularly to maintain healthy teeth. Lactoferrin is a multifunctional protein that has antiviral, antibacterial, antimicrobial and even anti-allergic properties making it a natural multifunction ‘immune shield’.

IMMUFORT’S IMMUNOGLOBULINS – FIGHTING THE BATTLE FOR YOU!

Can't subscribe you right now. Try later
Thank you for subscribing to the newsletter! We hope you enjoy shopping at Freddie Counsellor